During the annual IDFAcademy & NPO Fund Workshop, six young Dutch-speaking filmmakers develop a documentary plan in text and moving images under professional guidance. The aim of the workshop is to help talented filmmakers in their development and to contribute to the creation of an artistically high-quality development plan for a short or 55-minute documentary. The workshop has an international focus but participants are expected to understand and speak Dutch.

Meet the participants and tutors of 2021

Selected participants are coached in the research and development of a documentary film plan, both in terms of narrative structure and the writing of the actual plan. With an emphasis on authorship and building dramatic tension, the program aims to contribute to the participants' creative and professional development as filmmakers, stimulating them to investigate new forms of documentary storytelling and to pay close attention to intended target groups. In addition to the film plan, participants are tutored in the creation of a teaser, with a dedicated budget made available to each participant.

During the workshop meetings, the plans are examined under the guidance of the workshop leaders, and for inspiration, several guest classes are organized with professionals from different disciplines. New this year is an increasing international focus: whereas previous editions invited guest lecturers from within the Dutch documentary industry, the 2021 workshop includes several international sessions from the IDFA Project Space program.

During IDFA, the participants present their finished film plans and teasers before the Dutch public broadcasters. An independent jury selects the winner of the Karen de Bok Talent Award, consisting of an incentive prize of up to €25,000 for the further development of the plan. The final film plans may lead to an outcome within one of the NPO Fund's documentary schemes.

The IDFAcademy & NPO Fund Workshop is intended for emerging documentary filmmakers who have at least one (short) documentary to their name that shows talent and ambition, and that has been screened on television or another leading platform (festival, cinema, digital platform, etc.). Mid-career makers who are clearly motivated to explore a new form can also apply. Participants cannot be permanent employees of a Dutch broadcaster.

When applying, a synopsis and motivation are requested. In the synopsis, it is important that the film concept expresses urgency and originality and that the development challenge is clearly formulated. At the same time, demonstrable steps must have been taken in the research. In terms of motivation, participants are expected to be able to clearly explain why they want to participate in the workshop and what learning objectives they set themselves.

The working language of the workshop is Dutch. Filmmakers must have a command of the Dutch language in both speaking and writing. All participants must be well prepared and present at all meetings. 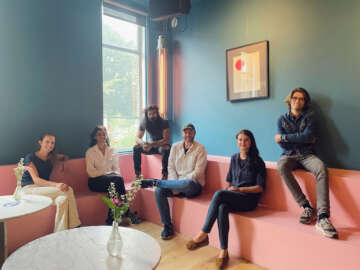 Get to know the filmmakers who are part of this year's IDFAcademy & NPO Fund Workshop.