During the annual IDFA Project Space NL supported by the NPO Fund, six documentary talents are professionally guided to develop a film plan with accompanying visual material. This several-month workshop, run out of IDFA’s Filmmaker Support department, aims to assist talented filmmakers in their development and contribute to the creation of an artistic, high-quality development plan for a documentary film. The workshop is enriched with several international components, but participants must have command of the Dutch language in both speaking in writing.

In the 2022 edition of the workshop, participants will receive substantive guidance as they research their project, develop a story structure, and write a film plan. With emphasis on authorship, the program encourages participants to explore new narrative forms within the documentary artform while paying attention to the intended audience of their film plan.

The workshop kicks off before the summer with an extensive yet intimate introductory meeting, combined with several inspiration sessions by world-renowned filmmakers—presented as part of the talent development program IDFA Project Space. The next workshop meetings take place between August and November. These pressure-cooker-style sessions aim to take the film plans considerably further along, potentially leading up to a development application at the NPO Fund.

Paul de Ruijter has won the Karen de Bok Talent Award 2022 for his film plan Let the Soft Animal In. The award, worth €25,000 towards the further development of the film, was presented to the maker at IDFA. This marks the 6th consecutive year that the Karen de Bok Talent Award is being presented to the winning documentary plan of the IDFA Project Space NL in collaboration with the NPO Fund workshop.

During IDFA in November, the participants present their finished film plans and teasers before the Dutch public broadcasters. An independent jury selects the winner of the Karen de Bok Talent Award, consisting of an incentive prize of up to €25,000 for the further development of the plan. The final film plans may lead to an outcome within one of the NPO Fund's documentary schemes.

More information about the program, participant profile, and application information is available in Dutch. 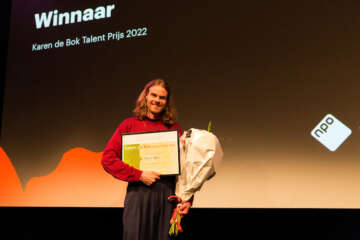 Paul de Ruijter has won the Karen de Bok Talent Award 2022 for his film plan Let the Soft Animal In.